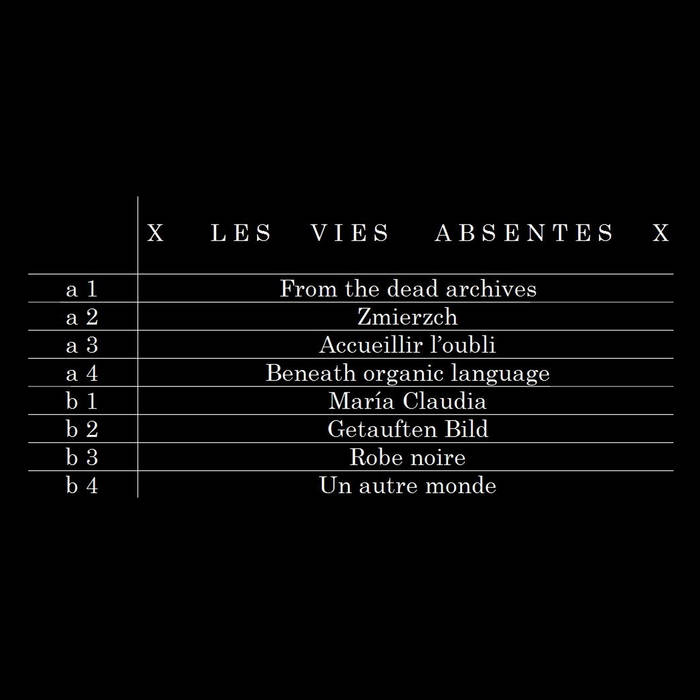 Eight soundpoems by Les Horribles Travailleurs,
constructed during 2014 - 2016,
using material of the l\h\t archives (1982 - ), except when mentioned.

This is the first of a series of releases by Les Horribles Travailleurs on the general theme of Absence.

Among other subjects, l\h\t studies Absence, in all it's forms and formlessness.
The subject is Absence itself, as well as human responses on - and relations and dialogues with Absence. Potential as well as Oblivion.

Results of this study are described in the language of sound - or, to be more exact: while describing Absences, a language shapes itself, and, at the same time, while discovering a language, Absence is more closely discovered, redefined.
This is not a study but a love affair.

"a music that is designed as a language that wants to seduce the Listener to interact with Absence after the death of language ... "
Saul Smaragd ( - )

This release coincides with the cultural event Code Rood (Code Red) on 'Buitenplaats Koningsweg', a former military base in Arnhem, The Netherlands.

z\w\a\r\t\24 is a long term project of z\w\a\r\t magazine in this building that is part of the 'Buitenplaats Koningsweg': “The now abandoned building KKN24 was a sleeping-quarter for soldiers, 4 in one room, 39 rooms in the whole building.
The building is waiting to be demolished, meanwhile it transforms back to nature.
In october 2014 artist BiOP got permission to use the building for site-specific artworks.
He invites several artists to transmute the building and their artwork, 24 hours a day."
Source: Transmute24 Facebookpage

About ‘z\w\a\r\t\24’:
With 'operation 1’, on October 13 2015, in which two windows were thrown in, the slow growth of a special issue of z\w\a\r\t magazine was started (not z\w\a\r\t 15).
Each operation corresponds with the making of a page of the magazine and will consist of interventions in the Transmute24 building, sound, photos, text and\or objects.
The operations are ways to penetrate the essence of the building.
The violence that is connected to the history of this area - and the violence of nature that currently affects the building - are part of that essence.
With the creation of the pages, the building will be given the possibility to display more hidden aspects, including its future absence.

During each 'Code Rood' event, that takes place on the last saturday of each month, there will be a dimension of sound in the Transmute24 building.
Mostly these are sound-operations that are part of the z\w\a\r\t\24 project, sometimes the sound is produced by others participants of Transmute24, sometimes it is a collaboration.

On each occasion created by z\w\a\r\t24, the musical dimension will be present in a different arrangement, with different sounds.

Saturday 30 april 2016 will be the 3rd occasion.
This time no sounds will be used that are based on recordings in\with the building.
Tracks and elements of the tracks of 'Les Vies Absentes' are brought to the building, in order to let the building add it's nature and presence to the soundworks.
This is a transformation, a remix by the former military structure, it's decay and nature that is slowly taking over the construction.
A process similar to the z\w\a\r\t\24 photos that are placed inside the building to give the building an opportunity to alter them (operation 4).

On 30 april, elements of the tracks can be heard on different locations in the building.
By walking through the building each visitor makes her\his own mix or composition of these elements.
The 8 tracks of the tape - and corresponding with them - the 8 sounds\locations are different aspects on the general theme of Absence.

Also: a soundrecording of the spatial arrangement will be made and uploaded on Bandcamp: leshorriblestravailleurs.bandcamp.com