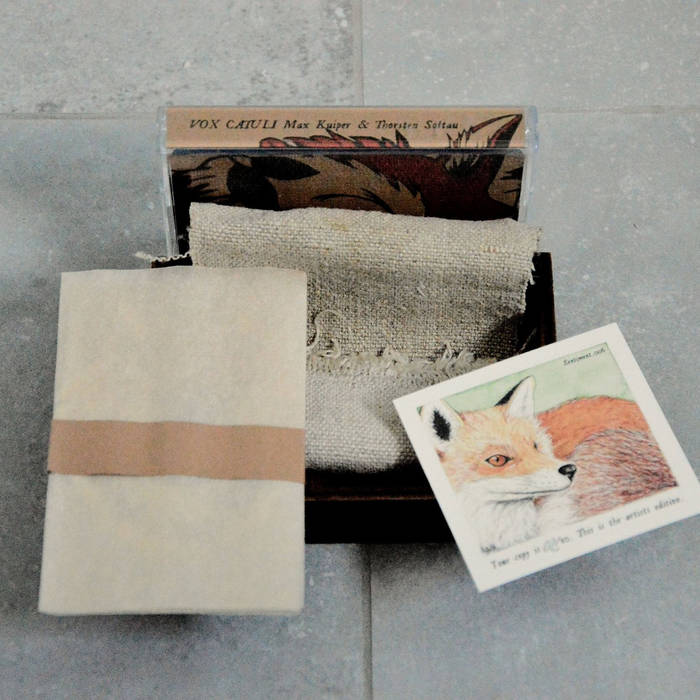 Beside a regular tape, there is also a limited number of a handmade special edition: the cassette with j-card is housed in a wooden 2-panels box and includes a patch and a certificate. See the photos made by Thorsten Soltau.

This is the second part of the Reynke De Vos/Renart (or Reineke) series.
A collaboratve project by Thorsten Soltau (Germany) and Max Kuiper (The Netherlands).
The approach is to offer sonic worlds that reflects locations, atmospheres and mental states related to the fable and the medieval world in general - as well as depicting the adventurous nature of Reynke.

The two works of 'Vox Catuli' are constructed by Max Kuiper from two sound works titled 'A Devious Fox Den' and 'Liturgy For Ysegrim', based on voice and electronics, that where composed by Thorsten Soltau for this project.
Max Kuiper did not listen to the completed versions - a series of soundcollages was built in reaction to listening to the isolated stems.

A series of metal sound bars;

A violin; a piano; a keyboard; midi-instruments (clarinet sample);

Field recordings:
- Churchbells;
- Water;
- A large group of sparrows in a garden;
- Wind moving a large transperant plastic sheet hanging in a abandoned military building;
- Fountain and voices in a zoo;
- Inside a catholic church during a service;

The voice of Thorsten Soltau reading from Reynart on request by Max Kuiper;

Also used was sound material from \ related to the first part of the Reynart project, titled 'Animi Sub Volpe Latentes', released on Chondritic Sound (US) in november 2016.
chondriticsound.bandcamp.com/album/animi-sub-volpe-latentes


For 2019 a third part is planned ; also the Raw Material, composed by Thorsten Soltau will be released in physical form; one or more performances could take place during this year.